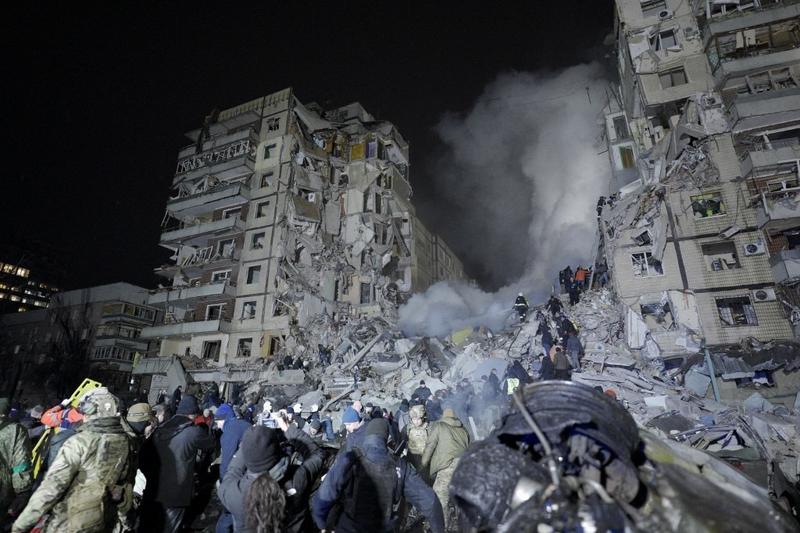 Rescuers work on a residential building destroyed after a missile strike, in Dnipro on Jan 14, 2023. (VITALII MATOKHA / AFP)

MOSCOW/KIEV – The death toll from a Russian missile attack on the central Ukrainian city of Dnipro has risen to 20, the regional governor said Sunday.

At least 73 people were injured, with four in intensive care, Valentyn Reznichenko, head of the Dnipropetrovsk regional military administration, said on Telegram.

A missile attack was launched on Saturday by the Russian forces against Ukraine's military command and control system and energy facilities, according to the Russian Defense Ministry.

"All assigned objects were hit. The targets of the strike have been achieved," spokesman Igor Konashenkov told a daily briefing.

The Russian forces are preparing for a lasting conflict with Ukraine, the main intelligence directorate of the Ukrainian Defense Ministry said Saturday on Facebook

In an interview with the Rossiya-1 television channel on the same day, Russian President Vladimir Putin said the process of the special military operation has been "positively assessed".

"Everything is developing within the framework of the plan of the Ministry of Defense and the General Staff," Putin said.

The Russian forces are preparing for a lasting conflict with Ukraine, the main intelligence directorate of the Ukrainian Defense Ministry said Saturday on Facebook.

According to the observations of the military intelligence of Ukraine, Russia is "preparing for a long-term war," it said.